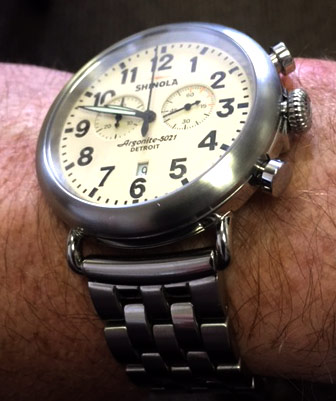 I’m a big fan of Detroit. I love its gritty, get-it-done, Midwestern style. The tremendous legacy of manufacturing. And just spending time in the City. I’ve never shied away from telling people I’m from the Detroit area when I travel. Even though I didn’t grow up in this area, my family has strong roots here. I’m good with Detroit – well, except possibly for the Lions. I tried. That didn’t work out.

So when the Shinola watch brand hit the marketplace, I became a big fan immediately. They proclaimed a strong tie to building their distinctive products in Detroit and the U.S. where feasible. Shinola has particularly applied the “Built in Detroit” brand to their watches. As a fan of both watches and Detroit, this really connected with me. And I’m shocked at the number of people I see with these watches who normally wouldn’t spend over a hundred dollars on ANY watch. The corporate branding has gained traction and its tie to Detroit is a big part of its “cool” factor. And I think the simple, impactful marketing has helped build a solid brand.

Enter the Federal Government. The FTC, already aggressively pursuing Kansas City watchmaker Niall for its “Made in America” claims, recently turned their attention to Shinola. While Shinola’s watches are assembled in Detroit – hence the “Built in Detroit” messaging – many of the movement components are made in Switzerland, and the crystals and hands come from China. An FTC spokeswoman recently termed this “potentially misleading”.

As a marketer I find this interesting. Shinola is doing EXACTLY what the Detroit automakers are doing – sourcing as many elements as is economically and logistically feasible in the U.S. and assembling watches in Detroit. Have you looked at the foreign parts content on a “domestic” car recently? Yet no one threatened Chrysler with its “Imported from Detroit” campaign.

Shinola has said publicly that it won’t back down from its “Built in Detroit” brand mantra. And I – someone who thinks about brands a lot – think this says a great deal about the brand’s integrity. It demonstrates commitment to both their brand position and their support of the Detroit region. Most importantly, it shows they’re living the “we’re tough and we’re not afraid of adversity” spirit of this area. I’m proud Shinola’s building watches not far from where my father was born and that they chose the heritage of Detroit to center their brand upon.

The lesson for marketers is simple – stand by your brand. It will serve you in good times and in bad. By flip-flopping around, impacted by every whim, you only weaken it. If you believe in your brand, be prepared to fight for it because as some point, for some reason, you’ll probably have to do so.

Image Sizes for Social Media Branding [Infographic]
When Branding Strategy and Product Don’t Align
Some Basic Branding “Don’ts”
It's Only Principle if it Costs You Money: Yeti Coolers
Ten Tips for Content Clarity
What Marketers Can Learn From Charlie Sheen
Keep Your Eye on the Ball
0 replies