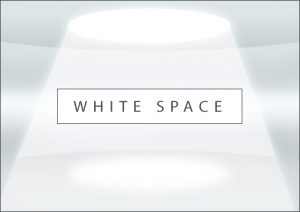 While I was attending the Digital Summit Detroit last week, the topic of white space came up in a few presentations. Meanwhile in some projects at the agency we had some discussions with clients who wanted to fill every available square inch.

Early in my career, I was taught that white space wasn’t what was left over after all the visual elements were used – it was a design element just like type or photos. Every day I see examples that illustrate the “cover every square inch” mantra. Like trade show booths with copy down at foot level. Or billboards with 20-word headlines, four URLs, and social media icons for every channel. Sometimes, quite simply:

See how I did that? You read that line because it was all on its own. It had impact, power, and simplicity. Three simple words. With space around them. A few other key benefits of white space:

An additional thought – “white space” doesn’t have to be white. When the term is used, it’s simply negative space. The color doesn’t matter, what does is the fact that it’s not filled by other elements.

So the next time you’re tempted to cram in just one more graphic to occupy that “empty” space, consider this: