Somewhere during my career I picked up the line, “It’s only principle if it costs you money”. As a brand strategist, I have to give Yeti Coolers props for standing up to the NRA. After notifying the organization that Yeti was discontinuing some outdated discounting programs – that included not only the NRA, but several other groups.

Unfortunately, the NRA decided to use this opportunity to grandstand and take a cheap shot (pun NOT intended) at Yeti. Sadly, this is what that NRA seems to have become – a bully. Yeti didn’t single them out. Yeti didn’t “decline to continue helping America’s young people enjoy outdoor activities…”. They ended an old program and offered the NRA a new one.

Yeti posted this statement on its social media channels yesterday: 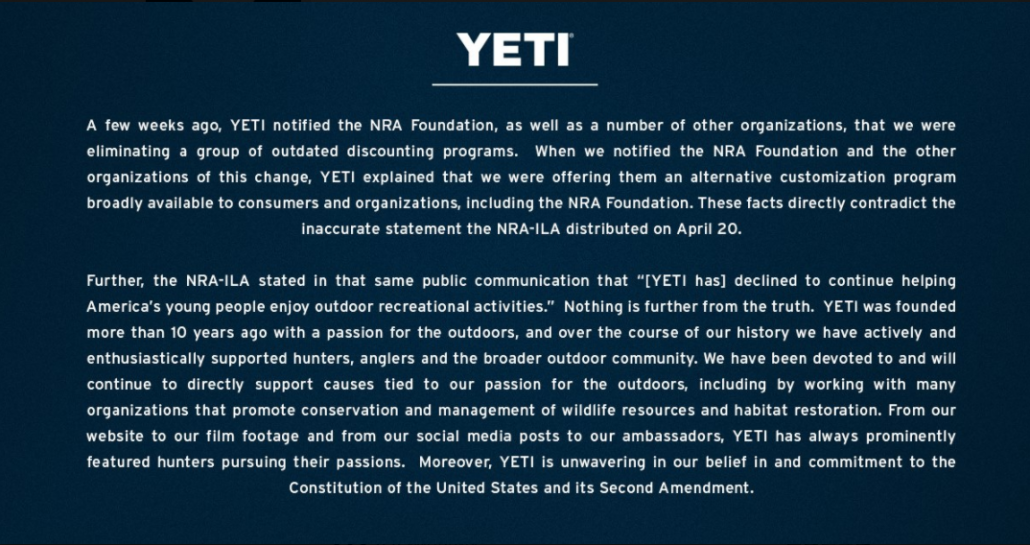 That took some serious stones. While the NRA has come under criticism, boycott, and other actions since the Parkland school shootings, few have the financial risk that Yeti faces. Unlike Delta Airlines, who dropped its NRA discount program (which according to USA Today only had 13 flyers use the discount), Yeti’s long-time core customers are largely made up of hunters and anglers – traditional NRA strongholds.

Today’s consumer wants an authentic brand. One that stands up to bullies. One that speaks its mind. And, one that uses clear, direct language – not inflammatory rhetoric – to communicate with key audiences. Congratulations, Yeti. You took a big risk here. One I think could just pay off in finding new customers.

Zuckerberg: A Marketers Take No One Gives a #@$%! About Your Blockchain
Scroll to top